Helping You Keep Your Family Healthy…Naturally

So, the other day my kids were begging me to take them to the park after I picked up my oldest (she is 6) at school. The problem was, I had other things on my to-do list. Things that were not urgent, but needed to be done. Plus, it’s not like I never take them to the park. That day was just not the best day to go. I told myself this as I mulled over in my head what was on the list. I almost said ‘no’, but looked back at all their faces just as I started to respond.

Bad move for my to-do list. Good move for them and their request. In that split second, I thought about them 10 years in the future, when none of them would want to go to the park with me, let alone be seen in public with me, and I heard myself saying “Sure! That sounds so fun!”.  Whhaaattt?!?!?!  Now, I have been accused of not being the most fun Mom on planet Earth. I am the enforcer, the rule creator and according to my 6 year old, Darth Bossy (that is my Darth Vader name). We all have them in our family. Guess who is Darth Fun Guy? Yup. My husband. And most of the time, it’s ok. Someone has to be the one that manages and plans out and coordinates. That’s just the way life works. And yes, my husband is SUPER FUN! We balance each other out that way.

But sometimes, Darth Bossy throws caution to the wind and GETS FUN!  So, back to my park story. We had to drive right by our house to get to the park they wanted to go to, so we stopped and picked up snacks and their bikes (I know, I was going fun crazy!). My soul is so glad that I said YES, instead of instinctually saying NO. My kids all met friends their age, and I even connected with an awesome Mom who’s daughter was playing with my daughter. I might even set up a play date for the girls, because the Mom is super cool and I can actually see myself not cringing and looking at my watch every 30 seconds to see if it’s time to go. 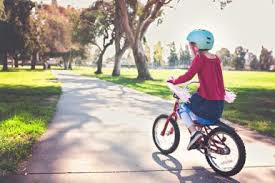 Later that night, getting ready for bed, my 3 kids all said how much fun they had, and how it was one of the most fun things they had done recently and wanted to know when we could go and do it again.   And all because I said YES instead of NO.  If I’m not careful, I might just become Darth Fun Mom and someone else will have to be Darth Bossy Dad. 😉

My running buddy on trails today. I dont think she’d do anything but run away if we saw a bobcat, but at least she’s cute.
Yup. My kiddo has a broken arm. Both bones in his forearm. Stinkin’ 🛴
Sooo... 🦟 love me. I’ve read anyone with a + 🩸 type has extra proteins on the outside of the cell membrane and that’s what makes us taste better to the buggers.
If you know how gross 🤮 it is...you KNOW you need these OnGuard individually wrapped wipes. Use and throw away. Keep in the truck or trailer.
Well friends - I have both good news and bad.
Fri-yay! 🙌🏻 Both these for $20!
Loading Comments...
%d bloggers like this: